Interesting discussion on mask types for cyclists, published by British newspaper, the Guardian. 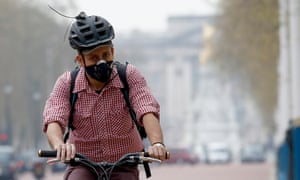 Many British urban bike commuters opt to wear a helmet. Some also go for a hi-vis jacket. But considerably fewer use an anti-pollution mask, despite evidence that smog might be the biggest single danger you face on two wheels.

According to a study carried out by Kings College London (KCL), around 9,500 people die in London alone every year due to long-term exposure to air pollution, with most deaths due to nitrogen dioxide (NO2) and fine particulates known as PM2.5s.

London’s levels of NO2 are high and exceed the EU’s pollution limits. It’s not just the capital’s cyclists who are being exposed to dangerously high levels of pollutants; Leeds and Birmingham have also been identified as high-risk cities.

While getting a lungful of bus exhaust is never fun, the evidence is mixed over whether cyclists are particularly at risk from pollution. Earlier work by KCL air quality experts suggested urban cyclists could be exposed to lower levels of particulates than some, possibly their journeys tend to be shorter, possibly because being on the move in the open air rather than inside a vehicle helps dissipate smog.

Nonetheless, a mask that helps to filter out dangerous pollutants from the air shouldn’t be sniffed at, especially given some studies which show masks can filter out nasties.

Dr Gary Fuller from KCL says a mask should be of benefit as long as it uses “sub-micron filters to filter out the small particles”. He adds: “A snug fit on the face is also critical”. The more expensive masks on the market, like those by Respro and Totobobo, do have these filters.

Henry Cole, founder of anti-pollution mask company Respro, argues that masks make sense: “The average bike commuter is breathing huge quantities of air per year. The danger comes from the cumulative effect of all these particles and over-exposure to these particles can lead to respiratory problems.”

If they’re so good at filtering at pollution then why isn’t everybody wearing one? A sales assistant I spoke to in cycling shop Evans told me that it slows him down and he struggles to breathe through the mask. “If you’re a commuter racing through the streets you’ll find them frustrating.”

Fuller notes that there is an alternative: taking an alternative route along back roads, where pollution levels tend to be far lower. But this isn’t always possible, so I’ve put some masks to the test on a near-five mile route through inner London.

This is by far the most commonly-seen cyclists’ mask in the UK. But it wasn’t entirely for me.

Struggling to breathe is a bit of a problem on a bike. After 100m I stop and turn it upside down to see if it’s any better. It doesn’t seem to make a difference. Not only am I getting weird looks from pedestrians who think I’m here to take over Gotham, I got an actual eye-roll from a fellow cyclist. Wearing my helmet, visibility is at the level of a paper bag with eyeholes cut out, which isn’t ideal.

However, when I inspect the filter there is a thin film of grey dirt which would have been sucked into my lungs. Better out than in. The valves, which wick away pollutants, also reassure me that the discomfort is worth it. I can’t smell any fumes, but then, I can’t smell much because there’s a lot of pressure on the bridge of my nose from the tight straps.

Marketed as a general anti-pollution barrier rather than specifically for cycling, this resembles a surgical mask, as if I was performing an operation when asked to run an urgent errand.

That aside, it’s lighter than the Respro and feels less restrictive. However, there are no valves which means my face gets really sweaty which isn’t the look I’m after on my commute.

The filters show up an astonishing amount of dirt after just a few cycles, which really hits home how dirty the air we breathe in is. It’s easy to attach and I can move my face when wearing it – a bonus.

BioLogic’s website describes the mask as “heavy duty pollution protection” for the “serious urban commuter”. Made from industrial-grade rubber and plastic, the mask has two replaceable carbon filters and dual “inhale ports” which claim to let you breathe easy even when you’re sprinting.

However, this thing is weighty, not to mention it looks like you’re fleeing from some kind of nuclear attack. If you value something more hardwearing than discreet then this is the mask for you. Online reviews suggest prolonged use can reduce asthma symptoms and when wearing it, there’s barely a scent of any traffic fumes.

Ultimately, it’s so unwieldy and strange-looking that you have to be either very confident or very asthmatic to use this.

These are the sorts of mask you see in news reports about China’s smog. There’s just one problem: lacking any sort of filter they’re simply not going to do anything. That’s definitely how it felt – as well as flapping in the wind, it didn’t fasten onto my face properly. Yes, they’re 45p per mask, but you’re better off stumping up more money for something that might actually work.

A foreigner’s guide being a Gentleman in Romania

Bucharest Metro Map & the stops for each line

Moving to Herastrau – Nordului – What’s it like to live here?

The Romanians are coming….thank god!

Best Camera To Use In Real Estate Photos?

Diesel cars to be banned in Athens, Barcelona, Mexico & Paris

Romania likely to be an emerging market, say FTSE

Coping with daily Quarantine in 2020

Investing in Romania & its Real-Estate – is it a smart...

Facebook
ABOUT US
Our English speaking, local brokers in our Bucharest and Brasov offices have a wide range of real estate skills and experience, from renting studios to Erasmus students to selling a major private hospital to an international investor.
Contact us: info@whitemountain.ro
FOLLOW US
© Copyright © White Mountain Property Romania. All rights reserved.